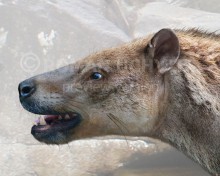 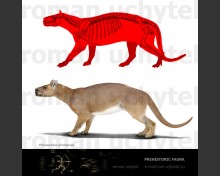 Temporal range: from the late Paleocene through middle Eocene, about 55 million years ago. (North America)

Phenacodus originated in the late Paleocene in western North America, where a relatively short time was quite widespread up to the north of Mexico and Canada. In the early Eocene, it spread out well to the south of Western Europe (France, Spain), but in contrast to North America, here they are rare. These early ungulates were the size of an adult sheep, but apparently more like predators. Their growth rate of 60 cm length reaches 1.7 m, and there was quite a long powerful tail. The front part of the body was squat, and the highest point of the waist was made ​​up of strong bones with the developed neural spines. On each limb, they had five fingers with small hooves, but they moved on three fingers - the middle finger is longer than others, and the first and fifth considerably shortened. They were probably omnivores, but the structure of their teeth clearly indicates the development of the ability to use relatively rigid plant forage. It lived in forest edges and woods, where plants were their main food - soft leaves and juicy fruits. In addition, they probably will not give up the foods of animal origin, if possible, eating carrion or preying on small vertebrates. The relative speed of movement helped this animal to run away from predators, and during the rescue of more fearsome predators, which at that time were members of the order creodonts. It is not excluded that Phenacodus, like some archaic ungulates living in the woods, had mottled pigmentation. In the first half of the Eocene, Phenacodus disappeared on both continents, probably lost in the struggle for survival, and were more mobile and intelligent competitors of these ungulates.