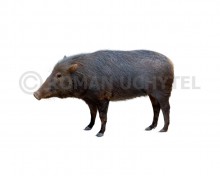 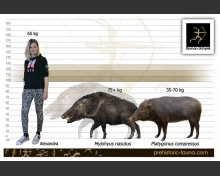 Platygonus (†Platygonus (LeConte 1848))
Order: Artiodactyla
Family: Tayassuidae
Expansion and period of existence: endemic to North and South America from the Miocene through Pleistocene epochs (~10.3 million to 11,000 years ago), existing for about 10.289 million years
Dimensions: length - 110 cm, height - 75 cm, weight - 30-70 kg.
A typical representative: Platygonus compressus, LeConte 1848
Platygonus is an extinct genus of herbivorous peccaries of the family Tayassuidae, was generally smaller than Mylohyus nasutus and its Irvingtonian ancestor, Platygonus vetus. It was approximately the size the the European wild boar, with downward pointing upper tusks and short snout, was endemic to North and South America from the Miocene through Pleistocene epoch. P. compressus stood 0.75 meters tall. Compared to modern peccaries, P. compressus had relatively longer legs.
Platygonus like modern peccaries, possibly traveled in herds. At least nine known species of Platygonus are known and ranged from southern Canada to Mexico and from California to Pennsylvania. The most recent credible date obtained for some species remains is about 11,000 BC.
In the late 1970s researchers described Chacoan peccary (Catagonus wagneri) from the Chaco region of western Paraguay (Wetzel 1977). Morphologically, Catagonus is more similar to extinct Platygonus than it is to other living taxa. Some paleontologists consider it a "relict" species and a living representative of the Platygonus lineage.
Tags:
Miocene, boar, North America, South America, peccaries, platygonus, herbivorous, Pliocene, Pleistocene
Related images