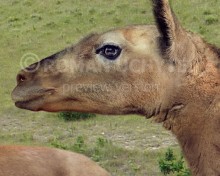 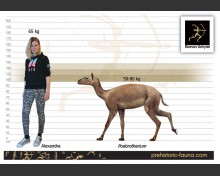 Poebrotherium (†Poebrotherium (Leidy, 1847))
Order: Artiodactyla
Family: Camelidae
Tribe: Camelini
Size: 1,5 m in length, 90-100 cm in height, 50-80 kg of weight
Time period: the Eocene - Miocene of North America (46.3—13.6 Ma)
A typical representative: P. wilsoni
Poebrotherium is an extinct genus of camelid, endemic to North America. They lived from the Eocene to Miocene epochs, existing for approximately 32 million years.
Poebrotherium was first named by scientist Joseph Leidy in 1848, and its relationship to other White River fossils was later expanded by him in 1853. The portions that Leidy was able to examine helped him determine it was likely related to modern llamas, even though there was a paucity of new material available after his 1848 diagnosis. Between 1848 and 1853, cases of new material were shipping back to Leidy. Maddeningly, only three more Poebrotherium tooth samples were among the remains recovered.
Its skull resembled that of a modern llama, while its limbs ended in hooved toes and were more built for speed than the feet of Protylopus. Despite this apparent adaptation to the open plains, Poebrotherium has been found in all major environments, including forests and river overbank deposits, indicating that it was not tied to one particular environment. The teeth of Poebrotherium were more generalised than those of modern camelids. In fact, despite the name meaning "grass-eating beast" it is likely that Poebrotherium was either a browser or a mixed-feeder, and grass may have played a minimal role in the diet.
Unlike its modern cousins, which are either adapted for desert or alpine conditions, Poebrotherium took the place of a gazelle or deer in the ecosystem. Fossil evidence has shown that Poebrotherium was a popular prey item for the entelodont Archaeotherium. Remains of partial Poebrotherium carcasses have been found fossilized, and appear to have been killed and cached by Archaeotherium, the only animal known from the White River ecosystem that could have made the feeding marks found on the bones of Poebrotherium.
Tags:
poebrotherium, Camelidae, North America, eocene, miocene, camelid, herbivorous
Related images