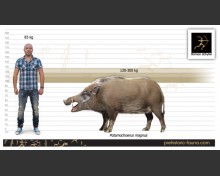 Today area bushpigs or river pigs confined to West and Central Africa. Discovered in Spain Potamochoerus magnus was much larger, abt like a modern forest pig (Hylochoerus meinertzhageni), and represents the first discovery of this group of pigs on the European continent. Before the discovery of Potamochoerus, typical Villafranchian pigs belonged to an boar Sus strozzii, well known from the Late Pliocene localities of Europe. In addition to the large size, the new species combines anatomical characteristics of an African genus Potamochoerus (structure molars) with the characteristics observed in the genus Sus (morphology of premolars). Giant bushpig of European Villafranchian different elongated nasal bones, long fangs circular cross-section and conservatism in the structure of the teeth (thick enamel, simplified structure of dental rugosity etc). Habitat of modern Potamochoerus can be very different - bushpigs live both in savannas as well as in marshy areas, but always prefer dense vegetation and high humidity. They are also good swimmers, and social organization may include herds of up to 50 individuals. Their diet consists of roots, tubers and fruit, sometimes also including invertebrates, eggs and carrion. The oldest bushpig - Potamochoerus afarensis - known from the Pliocene deposits of East Africa (Ethiopia), dating from about 3.5 million years ago. Obviously it is descended from an extinct subfamily of the Middle Miocene Hyotheriinae, being characterized by the development of the projections of the cranial bones, to which was attached a strong chewing muscles. At one time it was thought that these genus evolved in isolation on the African continent, while representatives showed up outside Africa as well. Potamochoerus fossils are extremely rare. Often fossil material was defined as belonging to the genus of Late Miocene Korynochoerus (North and East Africa, Turkey, Moldova, Ukraine, the Caucasus) or Propotamochoerus, whose range extends from the southern regions of Europe to China. The latter genus, whose members could reach a weight of 150 kg, disappears in the Pliocene, about 3.2 million years ago - probably because of the colder climate in rustsinii. Many features of the anatomy that are different from Sus, Propotamochoerus and Potamochoerus afarensis, as well as the large size, allowed to identify the form Potamochoerus magnus, but the phylogenetic relationships of this pig are still in doubt - there are hypotheses that it is a direct descendant of the Asian Propotamochoerus, while like other paleontologists suggest a close relationship with the African genus Kolpochoerus. Despite the widespread occurance of Potamochoerus in chronological interval, there are big breaks in the paleontological chronicle - perhaps it can be interpreted a specific environment, taking into account that modern bushpigs are found only in forests with dense vegetation.