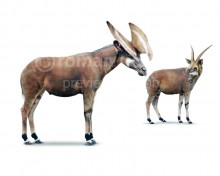 Time period: the Early Miocene of North Africa and Pakistan (16.9 to 15.97 million years ago).

Prolibytherium  is an extinct artiodactyl ungulate native to Early Miocene North Africa and Pakistan, from around 16.9 to 15.97 million years ago.

The 1.80 metres  long creature would have superficially resembled an okapi or a deer. Unlike these, however, Prolibytherium displayed dramatic sexual dimorphism, in that the male had a set of large, leaf-shaped ossicones with a width of 35 centimetres, while the female had a set of slender, horn-like ossicones.