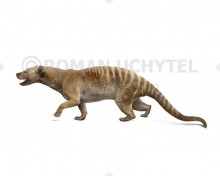 Prothylacinus (†Prothylacinus (Ameghino 1891))
Infraclass: Metatheria
Order: †Sparassodonta
Family: †Prothylacinidae
Dimensions: length - 1,4 m, height - 35-45 сm, weight - 30-40 kg
Temporal range: that lived during the Early Miocene in South America
P. patagonicus is the only representative of the Genus Prothylacinus known to science, belonging to the the Order Sparassodonta,  is an extinct genus of South American metatherian, that lived during the Early Miocene.
Outwardly, it somewhat resembled a looked more like a Borgiena (Genus Borhyaena) and was its close relative. Fossils of Prothylacinus have been found in the Friasian Río Frias Formation of Chile and the Santacrucian Santa Cruz Formation of Argentina.
Prothylacinus was a medium-sized animal with a muscular and flexible elongated body, the length of which was approximately 1.10 cm. The tail was quite thick and long. The height at the withers was approximately 35 to 45 cm, and the estimated weight was approximately 30 to 40 kg. The limbs of this marsupial predator were relatively short, but strong. The front legs were of the digitigrade type, while the hind legs were rather semi-descending. The claws on the front legs were larger and more curved, and were probably used for digging and climbing trees, and possibly also served as additional weapons to grab and hold the victim. The toes on the hind limbs were somewhat shorter with smaller and straighter claws than the front ones. This animals  led a terrestrial lifestyle, or in any case predominantly terrestrial, individual or family.
Prothylacinus had a strong and fairly straight skull, approximately 25 cm, with well developed cheekbones and strong jaws, which it could open very widely, like a marsupial wolf. Large, well-developed fangs and molars with open tubercles suggest an active predator, feeding primarily on live prey. The neck, in turn, was quite strong and quite long and probably extremely muscular.
Judging from the structure of its skeleton, it could climb trees, which it probably did from time to time, depending on the need.
Tags:
borhyaenidae, carnivora, metatheria, sparassodonta, prothylacinus, South America, miocene, marsupialia
Related images