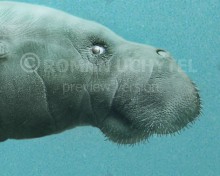 Protosiren (†Protosiren (Abel, 1904))
Order: Sirenia
Family: †Protosirenidae
Dimensions: length - 2,7 m, weight - 250 kg
Temporal range: during the Middle Eocene of North America, Africa, Europe and Asia.
A typical representative: Protosiren fraasi
Protosiren is an extinct early genus of the order Sirenia. Protosiren existed throughout the Lutetian to Priabonian stages of the Middle Eocene. Fossils have been found in the far-flung locations like the United States (South Carolina, North Carolina and Florida, Africa (Egypt), Europe and Asia (India and Pakistan).
So far, five species have been named. From comparative anatomy and chronological order it has been suggested that P. fraasi, P. sattaensis and P. smithae respresent an ancestor-descendant lineage. P. eothene is the oldest and smallest species.
Like the extant sirenians (manatee and dugong), Protosiren is thought to have fed on sea grasses as well as freshwater plants. Unlike extant sirenians, Protosiren had hind limbs. Although the limbs were well-developed, they were small and the sacroiliac joint was weak. Consequently, Protosiren is thought to have been only or primarily aquatic, rarely venturing on to land. It has been speculated that it swam by caudal undulation and used its hind limbs to crawl along sea floors in nearshore habitats while feeding. It might have occupied a different ecological niche than the contemporary Eotheroides, which had a closer resemblance to modern sirenians.
Tags:
eocene, sirens, protosiren, herbivorous, proboscidea, Paenungulata, Protosirenidae, Afrotheria, Tethytheria
Related images

Evolution of the Paenungulata, poster
$0.00