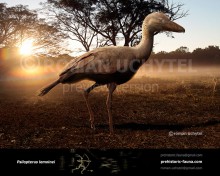 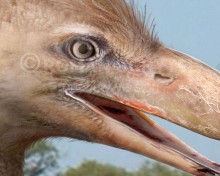 Psilopterus (†Psilopterus (Moreno & Mercerat, 1891))
Class: Aves
Order: Cariamiformes
Family: Phorusrhacidae
Subfamily: †Psilopterinae
Time period: Early Pliocene-Pleistocene of Argentina and Uruguay (~5.332–0.012 Ma)
Size: 80 cm in height, 7 kg of weight
Psilopterus is an extinct genus of phorusrhacid ("terror bird") from the Middle Oligocene to Late Pleistocene of Argentina and Uruguay. Compared to other phorusrhacids, members of the genus are both relatively gracile and diminutive, and include the smallest known species of terror bird: with the head raised P. bachmanni was 70–80 centimeters in height and weighed about 5 kilograms, while the largest members of the genus were only about 7 kilograms.
Psilopterus lemoinei is contemporaneous with P. bachmanni and likely filled a very similar ecological niche, though P. lemoinei is slightly larger, with an estimated weigh approaching 7 kilograms .
The birds resemble the modern cariama (Cariama cristata), except with a heavier build and smaller wings. The strong morphological similarity between the claws of the predatory cariama and Psilopterus, both of which are sharp, curved, and laterally compressed, may indicate they were used to strike prey. In contrast to the other, larger terror birds, Tonni and Tambussi also suggested Psilopterus could use their claws to climb trees, and could even fly, but this has been rejected in more recent literature. Fossil finds in Uruguay indicate the genus may have survived until 96,040 ± 6,300 years ago, millions of years after the larger phorusrhacids became extinct.
Tags:
Argentina, carnivore, South America, birds, endemic, Pliocene, predators, giant, terror birds, phorusrhacidae, Uruguay
Related images

Eleutherornis
$0.00
Add to Cart
Reviews (1)
Write a review:
Your Name: