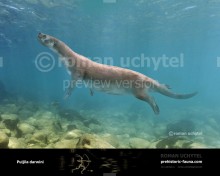 Time period:  lived during the Miocene epoch about 21 to 24 million years ago (North America)

Puijila darwini is an extinct species of seal which lived during the Miocene epoch about 21 to 24 million years ago. Approximately a 1 m in length, the animal possessed only minimal physical adaptations for swimming. Unlike modern pinnipeds, it did not have flippers and its overall form was otter-like, albeit more specialized; its skull and teeth are the features that most clearly indicate that it is a seal.

It is considered to be the most primitive member of the seal family yet found. The genus name is an Inuktitut word for a young seal; the species name honours the English naturalist Charles Darwin. The one known specimen is a nearly complete fossilised skeleton. It is being housed at the Canadian Museum of Nature in Ottawa, Ontario.

Puijila darwini was a semi-aquatic carnivore which represents a morphological link in early pinniped evolution. Its fossil remains demonstrate the presence of enlarged, probably webbed feet, robust forelimbs and an unspecialized tail. This suggests that Puijila swam quadrupedally using its webbed fore and hind feet for propulsion. Phylogenetic studies including molecular evidence suggest a sister relationship between pinnipeds (seals) and ursoids (bears) as well as musteloids (weasels and otters). It had been popularly assumed that land-dwelling mammals had at some point transitioned to a more marine existence, in essence "returning to the sea" in order to gain some sort of survival advantage. However, fossil evidence of this transition had been weak or contentious. The discovery of Puijila is important as it represents a morphological link in early pinniped evolution, and one that appears to morphologically precede the more familiarly structured Enaliarctos genus, despite apparently being a younger genus. In other words, Puijila is a transitional fossil that provides information about how the seal family returned to the seas, similar to the way that Archaeopteryx illuminates the origin of modern birds.