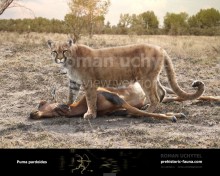 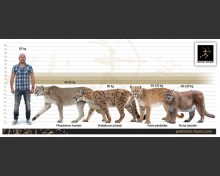 Viretailurus schaubi, Panthera schaubi and Panthera pardoides are the same thing, and are part of the genus Puma, so the correct name is Puma pardoides. What we know of Puma pardoides suggests that it was similar in appearance to modern pumas – certainly its short-faced skull is puma-like, and with an estimated mass of 40-45 kg, it was similar in size to typical modern pumas. Old World puma records are now known from the Transcaucasian region of central Asia and Mongolia, and Hemmer et al. (2001, 2004) suggested that Tanzanian and South African fossils from the Pliocene, identified as leopard, might actually be puma remains: ‘it now emerges from the haze of the highly fragmentary nature of the specimens, that the Pliocene African cats originally identified as leopards are not related to Panthera pardus, but rather to Puma. These African animals seem to foreshadow the later Eurasian pumas.

One of the great mysteries of the American puma has always been the fact that, in the fossil record, it appears suddenly about 40,000 years ago in the Late Pleistocene and yet doesn’t have an obvious American ancestor. The discovery of pumas in eastern Asia, and of older puma records in Europe and Africa, has now led to the suggestion that pumas originated in Africa, were widespread across the Old World during the last couple of million years, and crossed the Bering land-bridge during the Late Pleistocene to invade North America, then giving rise to the American puma Puma concolor (Hemmer et al. 2004).

Add to Cart
Reviews (18)
Write a review:
Your Name: