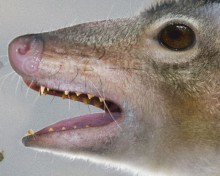 Purgatorius (Purgatorius (Van Valen & Sloan, 1965))
Class: Mammalia
Mirorder: Primatomorpha
Dimensions: weight - 40 g
Temporal range: Late Cretaceous-Paleocene of North America (66–63 Ma)
A typical representative: †Purgatorius unio Valen & Sloan, 1965
Purgatorius is a genus of four extinct eutherian species typically believed to be the earliest example of a primate or a proto-primate, a primatomorph precursor to the Plesiadapiformes, dating to as old as 66 million years ago. The first remains (P. unio and P. ceratops) were reported in 1965, from what is now eastern Montana's Tullock Formation (early Paleocene, Puercan), specifically at Purgatory Hill (hence the animal's name) in deposits believed to be about 63 million years old, and at Harbicht Hill in the late Cretaceous and lower Paleocene Hell Creek Formation. Both locations are in McCone County.
They have also been widely discovered in the early Paleocene Bug Creek fauna, along with leptictids. These deposits were once thought to be latest Cretaceous, but it is now clear that they are Paleocene channels with time-averaged fossil assemblages. It is thought to have been rat-sized 15 cm long and about 37g and a diurnal insectivore, who burrowed through small holes in the ground. Bones from the ankle are similar to those of primates, and were suited for a life up in trees. For many years, there has been debate as to whether Purgatorius is a primitive member of the primates or a basal member of the Plesiadapiforms. Several characters of the dentition of Purgatorius, which includes its incisor morphology, can ally it with later plesiadapiforms. T Due to general morphology of the postcanine dentition of Purgatorius, it could be expected to be characterized as a primitive member of the primates. However, due to the specializations of its incisors of P. janisae it is considered by some investigators as a basal member of the Pleasiadapiformes sensu lato.
A phylogenetic analysis of 177 mammal taxa (mostly Cretaceous and Palaeocene fossils), published in 2015, suggests that Purgatorius may not be closely related to primates at all, but instead falls outside crown-group placentals - specifically as the sister taxon to Protungulatum.
Tags:
primatomorph, North America, primatomorpha, Paleocene, primates, purgatorius, precursor, monkey
Related images