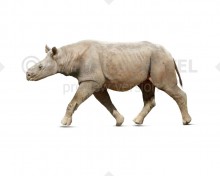 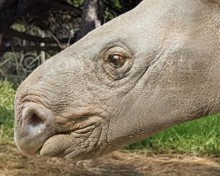 Ronzotherium (Ronzotherium (Aymard, 1854))
Order: Perissodactyla
Family: Rhinocerotidae
Temporal range: during the Late Eocene - Late Oligocene (Eurasia, (37 - 23 million years ago))
Dimensions: length - 3 m, height - 170 сm, weight - 1000 -1900 kg
Ronzotherium was a small to mid-sized rhinocerotid. Smaller species weighed in the region of 1t, while larger species could reach 1.9t in weight. The genus was similar in weight to the extant Black Rhinoceros although with an overall more slender and gracile build, with a long humerus and femur in comparison to other rhinocerotids. The genus shows a trend for increased size, with later species being considerably larger than some of its first representatives.
Ronzotherium did not possess a nasal horn. Instead the nasal bones were retracted, suggesting the presence of a large prehensile upper lip like those seen in modern rhinoceros species. The lower incisors of Ronzotherium were long and tusk- like, with a large diastema in the lower jaw between the incisors and other teeth. The upper incisors were much smaller. The forelimbs of Ronzotherium were tetradactyl, hindlimbs however were tridactyl, with three toes.
The 3 European species are  were seemingly widespread in the post-grande coupure fauna of Europe, with fossils discovered in Rupelian deposits from the United Kingdom, France, Germany, Italy, Switzerland, and the Czech Republic. Ronzotherium brevirostre and Ronzotherium orientale are known exclusively from the Late Eocene of Mongolia. Further material has been found in the Linxia basin in China's gansu province.
Isotope analysis of teeth discovered at Rickenbach in Switzerland has shown that european Ronzotherium species were adapted to the increasingly drier climate and open landscapes of the post-grande coupure Oligocene. The low crowned dentition suggests that Ronzotherium was a browser, feeding on the leaves of shrubs, bushes, and small trees. This is supported by the presence of the a prehensile upper lip which is used by modern rhinocerotids to browse on foliage.
The gracile build and long limb bones found in Ronzotherium suggest that it could have been capable of sustained running.
Tags:
oligocene, eocene, Asia, Europe, rhinoceros, herbivorous, Eurasia, ronzotherium, megafauna
Related images