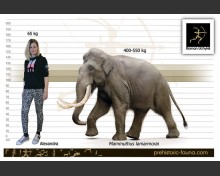 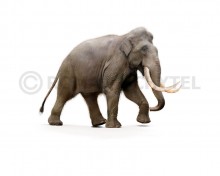 Sardinian mammoth (†Mammuthus lamarmorai (Forsyth Major, 1883))
Order: Proboscidea
Family: Elephantidae
Dimensions: height - 1,4 m, weight - 550 kg
Temporal range: during the late Middle and Upper Pleistocene (between 450,000 and perhaps 40,000 years) on the island of Sardinia)
Mammuthus lamarmorai is a species of mammoth which lived during the late Middle and Upper Pleistocene on the island of Sardinia. This pygmy mammoth has been found mostly in the fine-grained sediments of the western part of the island and as it is estimated to have reached a shoulder height of only 1.4 m and weighed about 550 kg.
As a mammoth, M. lamarmorai's closest living relative is the modern Asian elephant (Elephas maximus). The occurrence of this mammoth already in the late Middle Pleistocene makes that a descent from the classic woolly mammoth (M. primigenius) rather unlikely, since this latter species first appeared in Europe during the Upper Pleistocene. Rather, it is thought that the steppe mammoth (M. trogontherii), which lived on the continent, is the likely ancestor of M. lamarmorai.
The Cretan pygmy mammoth (M. creticus) and M. lamarmorai are the only known dwarf mammoths on the islands of the Mediterranean Sea, which were otherwise occupied by diminutive members of the genus Palaeoloxodon.
The species name, lamarmorai, honors to the Sardinian General and naturalist Alberto La Marmora (1789–1863), who had already in 1858 investigated the fossils of Funtana Morimenta.
The origin of M. lamarmorai is still relatively unclear – the earliest finds date from the late portion of the Middle Pleistocene, as their association with the dwarf deer Praemegaceros cazioti indicates, and are thus about 450,000 years old. A colonization of Sardinia through the steppe mammoth was therefore likely carried out in the transition from the old to the Middle Pleistocene or early Middle Pleistocene. Probably this happened during the Pleistocene glacial periods in which the global sea level was much lower due to the continental ice sheets and the animals could reach the island by swimming. Whether a single mammoth population reached Sardinia only once, is unclear, the somewhat larger tooth from Campu Giavesu suggests that there may have been several migration waves, as is also suggested by dwarf forms of the genus Palaeoloxodon of the Mediterranean islands of Sicily and Malta.
Tags:
Proboscidea, Elephantidae, mammoth, Europe, Sardinia, herbivorous, ice age, elephants
Related images

The Pleistocene of Mediterranean (Sardinia and Corsica)
$0.00
Add to Cart
Reviews (1)
Write a review:
Your Name: