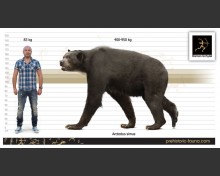 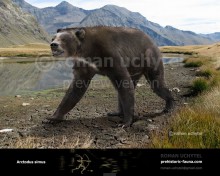 The short-faced bear or bulldog bear, or Arctodus, is an extinct genus of bear endemic to North America during the Pleistocene ~800—11,000 years ago, existing for approximately three million years. Arctodus simus may have once been Earth's largest mammalian, terrestrial carnivore. The species described are all thought to have been larger than any living species of bear. It was the most common of early North American bears, being most abundant in California. Arctodus simus (2 to 0.01 Ma.), 110.2 kg and 800 kg  as noted by Legendre and Roth, inhabiting a generally more northern and larger range. It was native to prehistoric North America from about 800,000 years ago, and became extinct about 12,500 years ago. It has been found from as far north as Ikpikpuk River, Alaska to Lowndes County, Mississippi. It is one of the largest bears in the fossil record and was among the largest mammalian land predators of all time. The type specimen came from Potter Creek Cave in Shasta County, California. Males from the Yukon region - the largest representatives of the species - would have stood about 1.80 m at the shoulder (on all fours), 4 m  upright and may have weighed about 800 kg. Arctodus simus was the largest carnivorous mammal that ever lived in North America. Arctodus simus specimens of at least 1,000 kg  were probably more common than previously thought. Furthermore, claw marks reaching heights of up to 5 m on the cave walls have been found at Riverbluff Cave, Missouri indicative of the great size of the short-faced bears who made them.