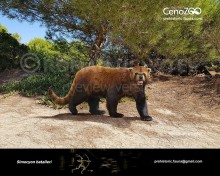 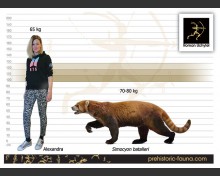 Simocyon (†Simocyon (Wagner, 1858))
Synonyms:  Amphalopex (Kaup, 1861), Araeocyon (Thorpe, 1922), Metarctos (Gaudry, 1860)
Order: Carnivora
Suborder: Caniformia
Family: Ailuridae
Subfamily: †Simocyoninae
Size: 1.5 m in length, 60 - 70 cm in height, 70 kg of weight
Time period: late Miocene and early Pliocene of Europe, Asia, North America and Africa
Typical representative: Simocyon primigenius (Roth and Wagner, 1854)
Simocyon is a genus of extinct carnivoran mammal in the family Ailuridae. Back in the Miocene, the fossil relatives of the red c were rather more diverse.
he relationship of Simocyon to other carnivores has been controversial, but studies of the structure of its ear, teeth, and ankle now indicate that its closest living relative is the herbivorous red panda, although it is different enough to be classified in a separate subfamily (Simocyoninae) along with related genera Alopecocyon and Actiocyon.
With a shoulder height of 70 cm and a body weight of around 60 kg, Simocyon batalleri was much larger than the red panda (Ailurus).
The teeth and skull of Simocyon indicate that it was carnivorous or omnivores, and it may have engaged in some bone crushing, like living hyenas. The skeleton of this animal indicates that, it could climb trees, although it probably also spent considerable time on the ground . Like a red panda, Simocyon and Ailurus both have a radial sesamoid, an unusual bone in the wrist that acts like a false thumb. Its competitors during its time period were tremarctine bears, nimravid false cats, and early canids and felids. At any danger, Simocyon could quickly climb up the nearest tree. All evidence suggests that the early ailurids developed a large radial sesamoid as an adaptation for proficient climbing, and only afterwards was this feature “recycled” by the later, more vegetarian red pandas, as an aid in handling bamboo.
Tags:
simocyon, Ailurus, Ailuridae, miocene, pliocene, Asia, North America, Europe, Africa, red panda
Related images