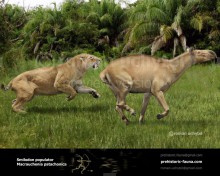 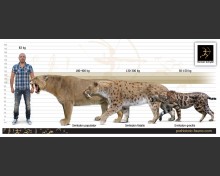 Smilodon populator was the largest saber-toothed species that ever lived, some 50% larger than its North American relative, Smilodon fatalis. Smilodon populator lived throughout much of the continent and was the only saber-toothed cat identified in South America for many years. Potential prey of Smilodon preserved in the cave include the ground sloth, the horses, a camelid, a deer, and a litoptern, Macrauchenia.

Macrauchenia patachonica is probably the most famous species of native South American ungulate. Macrauchenia had a very long neck and a snout completely enclosed by bone (like a sauropod dinosaur). These two features are not present in any living mammal with a proboscis, and they cast significant doubt that Macrauchenia had a proboscis. It had also very robust, three-toed limbs quite unlike those of modern camels. It has been suggested that the strong limbs of Macrauchenia may have allowed it to abruptly change its direction in order to escape predators such as Smilodon populator.
Tags:
smilodon, South America, Pleistocene, litoptern, saber-toothed cats, macrauchenia
Related images