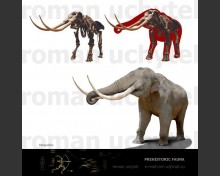 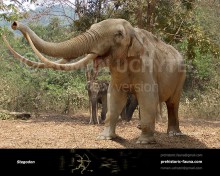 Expansion: Late Pliocene through to the end of the Pleistocene - Holocene (Africa and Asia)

Stegodon, is a genus of the extinct subfamily Stegodontinae of the order Proboscidea. It was assigned to the family Elephantidae (Abel, 1919), but has also been placed in Stegodontidae (R. L. Carroll, 1988). Stegodonts were present from 11.6 mya to late Pleistocene, with unconfirmed records of regional survival until 4,100 years ago. Fossils are found in Asian and African Pliocene to Neogene (Taiwan) strata. They lived in large parts of Asia and East and Central Africa during the Pliocene and Pleistocene, locally in Indonesia into the Holocene epoch.

Some Stegodon species were among the largest of all Proboscidea, with adults being 4 m high at the shoulder, 8 m long, not including 3 m long nearly straight tusks. In some individuals, the tusks were so close together that the trunk probably did not lie between them but instead draped over.

Similar to modern-day elephants, stegodonts were likely good swimmers, as their fossils are frequently encountered on Asian islands (such as Sulawesi, Flores, Timor, Sumba in Indonesia; Luzon and Mindanao in the Philippines; Taiwan; and Japan), which even during periods of low sea-level (during the cold phases of the Pleistocene) were not connected by land bridges with the Asian continent. A general evolutionary trend in large mammals on islands is island dwarfing. The smallest dwarf species, S. sondaari, known from 900,000 year old layers on the Indonesian island of Flores, had an estimated body weight of 300 kg, smaller than a water buffalo. A medium to large sized stegodont, S. florensis, with a body weight of about 850 kg, appeared about 850,000 years ago, and then also evolved into a dwarf form, Stegodon florensis insularis. The latter was contemporaneous with the hominin discovered in 2003, Homo floresiensis, and disappeared about 12,000 years ago.

In the past, stegodonts were believed to be the ancestors of the true elephants and mammoths, but it is currently believed that they have no modern descendants. Stegodon may be derived from Stegolophodon, an extinct genus known from the Miocene of Asia. Stegodon is considered to be a sister group of the mammoth, as well as the elephants. Some taxonomists consider the stegodonts as a subfamily of the Elephantidae. Both Stegolophodon and primitive elephants were derived from the Gomphotheriidae. The most important difference between Stegodon and the (other) Elephantidae can be observed in the molars. Molars of stegodonts consist of a series of low, roof-shaped ridges, whereas in elephants each ridge has become a high-crowned plate. Furthermore, the skeletons of stegodonts are more robust and compact than those of elephants.

In Bardia National Park in Nepal, there is a population of Indian elephants that, possibly due to inbreeding, exhibit many Stegodon-like morphological features. Some dismiss these primitive features as recent mutations rather than atavisms. Fossils of the small specialized stegodont Stegodon aurorae are found in the Osaka plain, Japan and date from approximately 2 Ma to 7 Ma. This species possibly evolved from Stegodon shinshuensis.