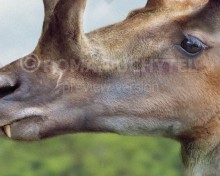 Syndyoceras (†Syndyoceras cooki (Barbour, 1905))
Order: Artiodactyla
Family: Protoceratidae
Temporal range: endemic to central North America, Miocene  (24.8—20.6 Ma)
Dimensions: length - 1,6 m, height - 80 сm, weight - 60+ kg
A typical representative: Syndyoceras cooki
Syndyoceras is a small extinct genus of Artiodactyla, of the family Protoceratidae, existing for approximately 4.2 million years.
The skull decoration of Syndyoceras looked quite unlike those of a deer. It had two pairs of horns. The first was a V-shaped pair on the snout, fused at the base. The second pair was placed between the eyes and the ears and was curved inwards, the horns facing towards each other in a semicircular shape. Like giraffe ossicones, these protrusions were covered with skin. They were probably used for display and fighting.
In addition to the horns, Syndyoceras also possessed tusk-like canine teeth, that it may have used to root through soil and undergrowth for food, in a similar manner to a modern musk deer.
The 1.6 m long, creature closely resembled a deer, having two hooved toes and reaching a weight over 60 kg. Like early horses, such as Merychippus, it had two vestigial outer toes on each foot, which did not touch the ground.
Tags:
Artiodactyla, endemic, protoceratids, syndyoceras, North America, miocene, Protoceratidae
Related images