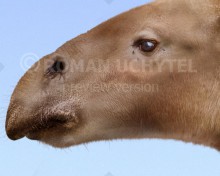 Theosodon (†Theosodon (Ameghino, 1887))
Order: †Litopterna
Family: †Macraucheniidae
Size: 2 m in length, 140 cm in height, 170 kg of weight
Time period: Early-Mid Miocene of South America
(17.5–11.8 Ma)
Theosodon is in the subfamily Cramaucheniinae within the family Macraucheniidae. A phylogenetic analysis of the family in 2014 found that Cramaucheniinae is a paraphyletic group, and that Theosodon is a sister clade to the subfamily Macraucheniinae, the least primitive of the members of Cramaucheniinae.
Extraordinarily, rather than having nostrils at the front of its head, Theosodon had its nostrils on the top of its snout, halfway between the forehead and the tip of the snout, and its nostrils pointed upwards rather than forwards, possibly as an adaptation for browsing on prickly vegetation.
n 1931, fossils found in the late Miocene Arroyo Chasicó Formation were assigned to the genus under the name Theosodon hystatus. This was questioned in 1995, and in 2014 it was moved to the genus Paranauchenia due to similarities to the species Paranauchenia denticulata. This move was supported by phylogenetic analysis that showed the two species formed monophyletic clade.
n 2018 a new species of macraucheniid litoptern was described based on the partial remains of a skull and two metapodials. A phylogenetic analysis tentatively linked the species to Theosodon as a sister clade and it was named Theosodon arozquetai pending revision. Its body mass was estimated to be somewhere from 80.8 to 116.2 kilograms. It dated to the middle Miocene, about 13 million years ago, somewhat later than most other Theosodon species.
Theosodon was a terrestrial and cursorial animal that may have lived in both forests and more open environments. It had a long neck and tapir-like, three-toed feet, and like other litopterns and modern horses, tapirs and rhinos, it bore its weight on its middle toes. Due to its size and its long neck, Theosodon was likely a high browser, stripping leaves off of trees and shrubs high off the ground. Theosodon had a slender jaw compared to many other litopterns, indicating its food was softer. As its nostrils are upward-facing and at the centre of its head rather than the front, Theosodon may have used this adaptation to feed on thorny plants. Some modern animals such as giraffes feed on thorny plants, and their nostrils are also further back and face more upwards than forwards.
Tags:
herbivorous, pleistocene, South America, theosodon, litoptern, miocene, ungulates, macrauchenia
Related images