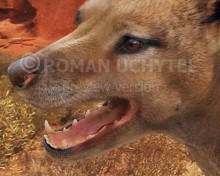 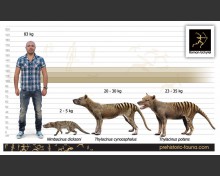 Thylacinus potens (†Thylacinus potens (Woodburne, 1967))
Order: Dasyuromorphia
Family: †Thylacinidae
Dimensions: length - 1,5 m, tail - 65 cm, height - 60 сm, weight - 23-35+ kg
Temporal range: Native to Northern Territory of Australia (Late Miocene)
Thylacinus potens - a larger species of Thylacinus, greater in size and weight than the Thylacinus cynocephalus and only exceeded by Thylacinus megiriani, the largest of the genus. The animal was similar to a dog in the form of its body and jaws, and probably able to kill prey such as wallabies and other herbivores larger than itself.
T. potens, originally known from a single poorly preserved fossil discovered by Michael O. Woodburne in 1967 in a Late Miocene locality near Alice Springs, Northern Territory.  Its size is estimated to be similar to that of a grey wolf, the head and body together were around 150 cm long, and its teeth were less adapted for shearing compared to those of the modern-extinct thylacine.
More specimens were described by Adam Yates in 2014, also discovered at the Alcoota site, revealing greater variety within the species and revising the weight estimates to greater than 35 kilograms.
An examination of tooth wear that suggests durophagy, probably bone-cracking behaviour, is interpreted as an evolutionary recent practice, to which the dentition was only partially suited, or a consequence of the ecological circumstances that created the mass assemblage of fossils at the same site. The modern thylacine was not recorded as cracking bones as part of its regular feeding habits, but known as a consumer of carrion, and the individual T. potens may have encountered a mass death during a period of drought in the sub-tropical Alcoota region. The revision of Thylacinus potens by Yates in 2014 concluded that the characteristics were closest to those of the thylacine, the most derived characters of the thylacinid phylogeny.
Tags:
Tasmanian wolf, carnivorous marsupial, thylacine, thylacinus, Australia, miocene
Related images