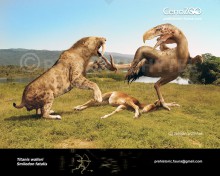 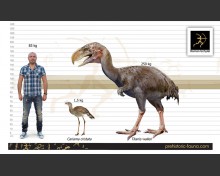 Titanis is a large extinct flightless carnivorous bird of the family Phorusrhacidae. It lived approximately early Pliocene to early Pleistocene in North America. Fossil evidence has been found in Gilchrist County, Florida dating from 3.0 to 2.9 million years.
It was 2.5 metres  tall and weighed approximately 150 kilograms, but with large variance (perhaps indicating strong sexual dimorphism). Though its skull has not been found, it most probably would have been large, with a huge, axe-like beak, like its relatives. Overall, Titanis was very similar to the South American Phorusrhacos and Devincenzia, its closest relatives. However, it differs from these in having a shorter, thicker neck, a bulkier head, and an overall more heavily-built bodily structure. Little is known of its body structure, but it seems to have been less wide-footed than Devincenzia, with a proportionally much stronger middle toe. It is estimated that Titanis could run at speeds of 65 km/h.
The wings were small and could not have been used for flight. The wing bones articulated in an unusual joint-like structure, suggesting the digits could flex to some degree. It also had a relatively rigid wrist, which would not have allowed the hand to fold back against the arm to the same degree as other birds. This led one scientist, R.M. Chandler, to suggest that the wings may have supported some type of clawed, mobile hand similar to the hands of non-avian theropod dinosaurs, such as the deinonychosaurs (also popularly known as "raptors"). However, it was later pointed out that this wing joint is not in fact unique, and is present in seriamas (modern members of the same bird group to which Titanis belonged), which do not have any specialized grasping hands.
From circumstantial evidence (i.e., bone fractures), it has been suggested that the species did not become extinct until 15,000 years ago, but more precise dating by McFadden and colleagues refutes such a late date; all known Titanis fossils appear to be at least 2 million years old. Titanis was part of the group of giant flightless birds called the Phorusrhacidae, which are nicknamed "terror birds", and has been thought to represent the youngest species of the lineage (recently, a significantly younger South American example has been reported). The Phorusrhacidae originated in South America; Titanis is the only known member of the branch of the group that migrated out of that continent during the Great American Interchange.