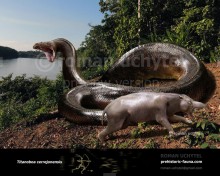 Titanoboa,  is an extinct genus of snake that lived approximately 60–58 million years ago, during the Paleocene epoch, a 10-million-year period immediately following the dinosaur extinction event. The only known species is Titanoboa cerrejonensis, the largest, longest, and heaviest snake ever discovered, which supplanted the previous record holder, Gigantophis. By comparing the sizes and shapes of its fossilized vertebrae to those of extant snakes, researchers estimated that the largest individuals of T. cerrejonensis found had a total length of around 12.8 m  and weighed about 1,135 kg.

In 2009, the fossils of 28 individual T. cerrejonensis were found in the Cerrejón Formation of the coal mines of Cerrejón in La Guajira, Colombia. Prior to this discovery, few fossils of Paleocene-epoch vertebrates had been found in ancient tropical environments of South America. The snake was discovered on an expedition by a team of international scientists led by Jonathan Bloch, a University of Florida vertebrate paleontologist, and Carlos Jaramillo, a paleobotanist from the Smithsonian Tropical Research Institute in Panama.

Because snakes are ectothermic, the discovery implies that the tropics, the creature's habitat, must have been warmer than previously thought, averaging approximately 30 °C. The warmer climate of the Earth during the time of T. cerrejonensis allowed cold-blooded snakes to attain much larger sizes than modern snakes. Today, larger ectothermic animals are found in the tropics, where it is hottest, and smaller ones are found farther from the equator.

However, several researchers disagreed with the above estimate. For example, a 2009 study in the journal Nature applying the mathematical model used in the above study to an ancient lizard fossil from temperate Australia predicts that lizards currently living in tropical areas should be capable of reaching 10 metres, which is obviously not the case.

In another critique published in the same journal, Mark Denny, a specialist in biomechanics, noted that the snake was so large and was producing so much metabolic heat that the ambient temperature must have been four to six degrees cooler than the current estimate, or the snake would have overheated.