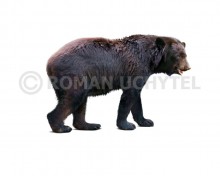 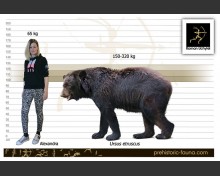 Etruscan bear (Ursus etruscus (Cuvier, 1823))
Order: Carnivora
Family: Ursidae
Dimensions: length - 1,7-2,3 m, height - 100-130 сm, weight - 150-320 kg
Temporal range: the Pliocene - Late Pleistocene of Europe, Asia and North Africa (~5.3 million to 100,000 years ago)
The Etruscan bear is an extinct species of bear from Europe, Asia and North Africa during the Pliocene through Pleistocene.
This is bear appears to have evolved from Ursus minimus and gave rise to the modern brown bear, Ursus arctos, and the extinct cave bear, Ursus spelaeus. Not unlike the modern brown bears of Europe in size, it had a full complement of premolars, a trait carried from the genus Ursavus.
The range of U. etruscus was mostly continental Europe with specimens also recovered in the Great Steppe region of Eurasia. Fossil evidence for Ursus etruscus was recovered in Palestine, Croatia, and Tuscany, Italy.
Some scientists have proposed that the early, small variety of U. etruscus of the middle Villafranchian era survives in the form of the modern Asian black bear.
Tags:
Ursus etruscus, Pliocene, Pleistocene, ice age, megafauna, bear, Europe, Asia, Africa, cave bear
Related images