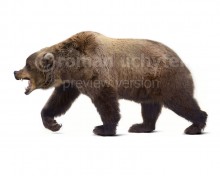 "Whereas U. spelaeus inhabited mainly low and medium elevation areas, U. ingressus has mostly been found in medium and high elevated regions (Baryshnikov and Puzachenko, 2011). Recent isotopic analyses showed also some dietary differentiation between these cave bear haplogroups (Bocherens et al., 2011; Dotsika et al., 2011). Ursus ingressus was likely better adapted to continental environments and, thus, might have outperformed U. spelaeus during cold and arid climate conditions (Baryshnikov and Puzachenko, 2011). "

The vast majority of fossil remains in Late Pleistocene deposits from Niedźwiedzia Cave in Kletno, Sudetes, Poland, belong to the cave bear. Phylogenetic analyses based on a fragment of the mitochondrial D-loop region extracted from two cave bear samples unambiguously showed their close relationship with the Ursus ingressus haplogroup. This taxonomic affiliation of the cave bear remains from Niedźwiedzia Cave was further confirmed by biometrical analyses of molar teeth and skulls. Our results represent the first record of U. ingressus north of the Carpathian Arch, while radiocarbon dating (> 49,000 yr BP) of the samples indicates that they represent some of the oldest specimens of this cave bear taxon known so far. Multi-method phylogenetic analyses including numerous publicly available cave bear sequences allowed analysing the relationships among these samples in details, including the significance of particular clades, and discussing some aspects of cave bear phylogeography. The sequences of U. ingressus from Poland are most closely related to specimens from the Ural Mountains and next to Slovenia, which may indicate migrations between Central and Eastern European populations. The internal placement of Ural