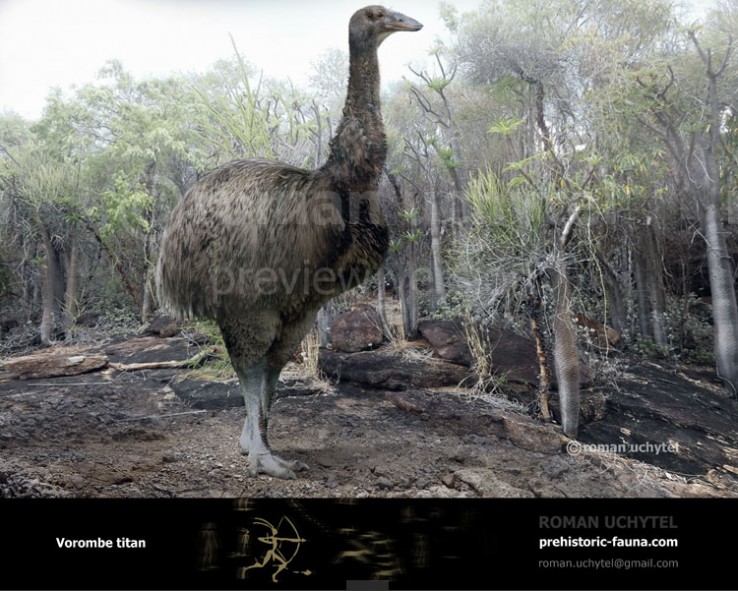 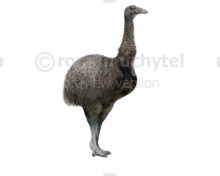 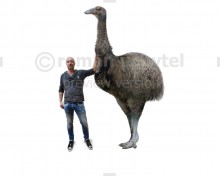 Vorombe is one of three genera of elephant birds, an extinct family of large ratite birds endemic to Madagascar. Specimens belonging to the genus include the heaviest known birds, and were originally considered to be large Aepyornis specimens. The genus was erected in 2018 after a detailed morphometric analysis. Vorombe stood 3 m tall and weighed 536 to 732 kg, with a mean of 642.9 kg. This is greater than the mass estimates of other extinct Quaternary giant birds such as Dinornis, which was between 61 and 275 kg, and Dromornis, between 316.6 and 727.8 kg, making it the largest known bird. The largest femur (MNHN MAD 368) measured by Hansford and Turvey could not be formally assigned to a cluster (group) as it was incomplete. The specimen is thought to belong to Vorombe on the basis of its size. It had a least-shaft circumference of 308 mm, which gives a weight estimate of 860 kg, making it the largest known bird individual ever recorded. This is comparable to or greater than the mass estimates of the smallest (insular dwarf) sauropod dinosaurs: Europasaurus, at 690 kg; and Magyarosaurus, between 700 and 1,000 kg.

Vorombe titan was first described by Charles William Andrews as Aepyornis titan in 1894. It was synonymized with the type species of Aepyornis, A. maximus, by American paleontologist Pierce Brodkorb in 1963. In 2018, James Hansford and Samuel Turvey, two researchers from the Zoological Society of London, found that it was sufficiently distinct from Aepyornis and allocated it in the new genus Vorombe. They also recognized Aepyornis ingens as a synonym of V. titan. The study by Hansford and Turvey is the first taxonomic reassessment of elephant birds in over 50 years.

The genus name Vorombe is derived from the Malagasy word vorombe meaning "big bird" while the specific name titan is derived from the Ancient Greek word Τιτάν (Titan). The syntype series of Vorombe titan includes a femur (NHMUK A439) and tibiotarsus (NHMUK A437) found in Itampolo (Itampulu Vé), Madagascar.

The femur of Vorombe is significantly larger than that of Aepyornis and Mullerornis in all measurements. Samples from two femora assigned to Vorombe titan (specimens MNHN MAD 364 and NHMUK A2142) were sent for accelerator mass spectrometer carbon-14 dating at the Oxford Radiocarbon Accelerator Unit and calibrated using ShCal13. Both specimens were dated to the Holocene (3,680 to 2,352 BP).

Vorombe titan, Aepyornis maximus and Mullerornis modestus were found across much of Madagascar, and were sympatric in the arid spiny forests in the south, succulent woodlands in the southwest and grassland/subhumid forest mosaic in the Central Highlands. The significant size differences between the three taxa indicates that they exploited different dietary niches and plant interactions. Elephant birds shared the Quaternary ecosystems of Madagascar with dwarf hippos, giant lemurs and giant tortoises.