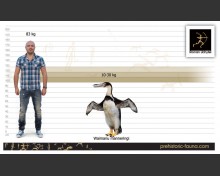 Waimanu is currently the oldest known penguin, and it is an ancient taxon indeed.  The rocks containing the Waimanu manneringi holotype skeleton are an astounding 61.6 million years old, far and away the oldest to produce penguin bones. A close relative, the smaller Waimanu tuatahi is found in rocks 58-60 million years old. To put this in perspective, these penguins lived just 4-5 million years after the mass extinction that killed off the dinosaurs (except for birds of course).

The first fossils of this taxon were collected almost 20 years ago by Al Mannering, in whose honor the first species is named.  Both come from the Waipara Greensand, a unit of sedimentary rocks laid down in nearshore waters during the Paleocene in present down North Canterbury.  During the Paleocene, this area of the South Island of New Zealand was submerged, and penguins, plankton and shellfish often became entombed in the dark sandy sediments upon death. Millions of years later, these rocks and their trove of fossils were exposed as tectonic forces lifted the ancient seafloor up to the sun and the Waipara River cut away the overlying layers.

These early penguins inherited a world in which a reset button had been firmly pressed. It was warm, rather homogenous in temperature across most of the latitudinal gradient, and most importantly, nearly every major niche was hung generously with “help wanted” signs.  For much of the Mesozoic, dinosaurs dominated terrestrial ecosystems and large marine reptiles occupied the aquatic tetrapod predator niche.  Mosasaurs, plesiosaurs and pliosaurs swam the seas worldwide.  But at the end of the Cretaceous, an asteroid impact wiped out all of these groups.  Even sharks were decimated, though of course some survived to re-supply our oceans and imaginations with toothed nightmares.

This extinction spelled opportunity for many groups.  Mammals radiated into the void left by dinosaurs, and some dinosaurs got a new opportunity.  The volant (flying) ancestors of penguins had a window in which the seas were free of largely free of competitors and low on predators.  This was a perfect time to drop flight altogether.  By 60million years ago, Waimanu manneringi and Waimanu tuatahi, two closely related species, had reached this critical stage in penguin evolution.

Waimanu is both amazingly penguin-like and amazingly primitive.  Waimanu manneringi was a healthy size, about halfway between a King Penguin and an Emperor Penguin in standing height, while Waimanu tuatahi was a bit smaller, about 80cm tall. Waimanu manneringi is only known from a single hindlimb and pelvis, while specimens of Waimanu tuatahi is much more complete – multiple specimens together combine to give us almost the entire skeleton.  From head to toe, the skeleton of Waimanu combines primitive and derived characters.  The skull exhibits the long, narrow beak seen in other early fossil penguins rather than a stubbier modern penguin beak.  The flipper is much shorter than the wing of a flighted bird, but significantly longer relative to the body than in living penguins (indicating it would have a lower wing load).  The bones are also more flattened than flighted birds but less flattened than living penguins, which have highly compressed bones to form a more knife-like wing profile.  In the hindlimb, Waimanu is very close to modern penguins.  The shape of the limb bones indicate an upright posture like modern penguins employ, and the feet are short and stubby.  So Waimanu walked like a penguin on land, swam like a less-efficient penguin in the water, and probably ate the same basic foods (perhaps a little fish heavy).  There is a lot more to say about these fascinating species, but I will await some upcoming work by the Waimanu team to cover that story.

The closest relatives of penguins that are alive today are the Procellariiformes, the group that includes albatrosses and petrels.  These birds are commonly called tubenoses because their nostrils take the form of short tubes instead of flat openings. Most likely, the penguin lineage and the tubenose lineage split off from one another and started on their own evolutionary paths deeper in time, perhaps even during the Cretaceous Period. At this deep split, the birds heading off along the evolutionary trajectories to modern penguins and modern petrel probably looked a lot more like a petrel than a penguin – certainly volant (capable of flight) and probably with a similar ecology to some modern tubenose birds.  Whether we would call the bird on the penguin side of the split a “penguin” is debatable – it would probably be very hard for us to recognize a fossil penguin in the rock record until, like Waimanu, they evolved  a flightless lifestyle.  So, pending the discovery of a mind-bending fossil of a flying penguin, we’ll let Waimanu revel in its place in the sun.

Palaeeudyptes
$0.00
Add to Cart
Reviews (6)
Write a review:
Your Name: