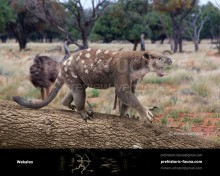 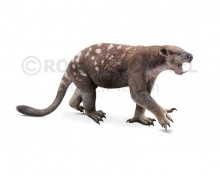 Temporal range: lived in Australia in the early to late Miocene

Wakaleo, was a genus of medium-sized thylacoleonids that lived in Australia in the early to late Miocene. It was approximately 80 cm long, or the size of a dog. Although much smaller than its close relative, the marsupial lion (Thylacoleo carnifex), Wakaleo would have been a successful hunter in its time. It had teeth specially designed for cutting and stabbing. The ocelot-sized predator Wakaleo, along with its jaguar-sized relative Thylacoleo, were actually related to the herbivore wombats.

Wakaleo alcootaensis was found in the Miocene Waite Formation in the Northern Territory in 1974. It was slightly larger than the other two species.

Wakaleo oldfieldi was found by a group of scientists working in the Miocene Wipijiri Formation in southern Australia in 1971. They found a nearly complete left dentry which included a few well-preserved teeth.

Wakaleo vanderleuri was first found by some field workers in 1967 in the Miocene Camfield Beds in the Northern Territory. Many more specimens have been found since then.