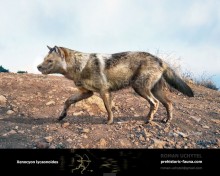 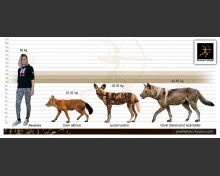 Temporal range: It existed during the Early Pleistocene to the Middle Pleistocene in Africa and Eurasia

The species was originally named Xenocyon lycaonoides (Kretzoi 1938) but was later reassigned as Canis (Xenocyon) lycanoides. It existed from the Early Pleistocene to the Middle Pleistocene in Africa and Eurasia. The diversity of the wolf-sized species decreased by the end of the Early Pleistocene and into the Middle Pleistocene of Europe and Asia. These wolves include the large hypercarnivorous Canis (Xenocyon) lycaonoides that was comparable in size with the modern gray wolf (C. lupus) northern populations, and the small wolf C. mosbachensis/C. variabilis that is comparable in size to the modern Indian wolf. Both types of wolves could be found existing from England and Greece across Europe to the high latitudes of Siberia through to Transbaikalia, Tajikistan, Mongolia, and China. The true gray wolves did not make an appearance until the end of the Middle Pleistocene 500-300 thousand years ago.

Just before the appearance of the dire wolf (Canis dirus), North America was invaded by the genus Xenocyon, which was as large as C. dirus and more hypercarnivorous. The fossil record shows them as rare and it is assumed that they could not compete with the newly derived C. dirus. These have been ascribed to Xenocyon lycaonoides, with Xenocyon texanus from as far south as Texas as its taxonomic synonym.