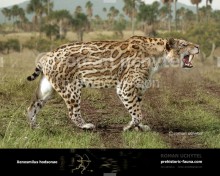 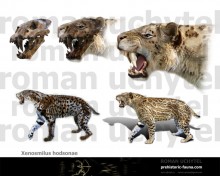 Time period: Pleistocene of  North America (The fossils were of Irvingtonian age (1.8 to 0.3 Ma).

Xenosmilus is a genus of extinct Machairodontinae, or saber-toothed cat. They lived about 1 million years ago, but as there are only two specimens of the same age, when they appeared and when they became extinct is unclear. Currently, there is only one species known, X. hodsonae.

Physically, the cat measured between 1.7–1.8 m long with a highly muscular body, even more muscular than any other cat alive or dead, and the animal probably weighed around 200- 350 kg. Only Smilodon populator was noticeably larger amongst the saber-toothed cats. Before their discovery, all known saber-toothed cats fell into two general categories. Dirk toothed cats had long upper canines and stout legs. Scimitar toothed cats had only mildly elongated canines, and long legs. Xenosmilus broke these groupings by possessing both stout muscular legs and body, and short broad upper canines.

Found alongside the two skeletons were dozens of peccary bones. It seems likely, with their muscular builds, that X. hodsonae preyed upon peccaries in life.

Add to Cart
Reviews (12)
Write a review:
Your Name: