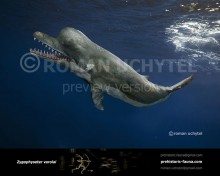 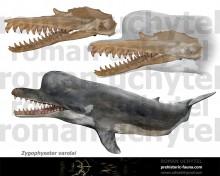 Zygophyseter, killer sperm whale († Zygophyseter (Bianucci & Landini, 2006))
Order: Cetacea
Superfamily: Physeteroidea
Family: incertae sedis
Time period: Late Miocene epoch ( 11.6–7.2 mya)
Size: Body length of 7 metres.
Zygophyseter varolai is an extinct sperm whale that lived during the Tortonian age of the Late Miocene.  It had a beak, the ability to echolocate prey, and could have probably swum faster than the modern-day sperm whale which goes 4 kilometers per hour. These were probably used in the capture of large prey, such as large fish, seals, and whales. In fact, its common name, the killer sperm whale, refers to its feeding habits that would have had a resemblance to the modern-day killer whale (Orcinus orca).
The type and only specimen, is of an almost complete skeleton discovered in southern Italy by geologist Angelo Varola in the marine lime mudstone of the Pietra Leccese Formation near the city of Lecce. It was described in 2006 by geologists Giovanni Bianucci and Walter Landini from the University of Pisa.
Zygophyseter is part of a fossil stem group of hyper-predatory macroraptorial sperm whales (often shortened to "raptorial") which also includes Brygmophyseter, Acrophyseter, and Livyatan. This group is characterized by having large, functional teeth on both the upper and lower jaw with an enamel coating; whereas the modern sperm whale lacks enamel, teeth in the upper jaws, and functionality in the teeth for catching prey. Zygophyseter is more closely related to Brygmophyseter and Acrophyseter than to Livyatan, and the enlarged teeth of this group are thought to have evolved either from a common basilosaurid-like ancestor, or independently once or twice within the group.
The head probably took up 21–23% of the total body size, compared to that of the modern sperm whale which takes up around one fourth to one third of the total body size. Like in other sperm whales, the blowhole was slanted towards the left side of the animal, and it may have lacked a right nasal passage.
Like in modern sperm whales, Zygophyseter had a very large basin above the braincase, known as the supracranial basin, which probably housed the spermaceti organ and the melon. These are used in the generation and focusing of sound for biosonar in the modern sperm whale, indicating Zygophyseter had some mechanisms for biosonar; that is to say this animal could have used echolocation. The zygomatic processes of the temporal bone on the cheeks were elongated probably because they supported the spermaceti organ.  It probably had an echolocation system similar to that of the modern sperm whale, and Zygophyseter may have, in comparison to the echolocative abilities of other modern toothed whales, produced smaller bandwidths and lower center frequencies. This would have made it inept at detecting anything that did not have a diameter of at least 1 meter.
Since the teeth of Zygophyseter are large, exhibit wearing not unlike the teeth of modern-day killer whales, and had functionality in both the upper and lower jaws, it was likely a macropredator that fed on large fish, cephalopods, seals, and small cetaceans. The position of the condyloid processes between the jaw and the skull, like in the modern sperm whale, allowed it to open its jaw wider in order to grab large prey.  The conical front teeth may have functioned as a means for gripping onto prey, and the back teeth were used for cutting. However, neither stomach contents nor cut marks on the bones of prey species have been discovered, and thus its diet is speculative.
The Z. varolai specimen most likely inhabited the Paratethys Sea. This formation has also unearthed the remains of several other large vertebrate species. Ancient sirenians of the genus Metaxytherium were apparently common throughout the ancient Mediterranean Sea. Many fish remains of teleost fish, rays, and at least twenty species of sharks have been discovered, such as the tiger shark (Galeocerdo cuvier) and the extinct Otodus megalodon.  Aside from Zygophyseter, two other cetacean species have been described from this formation: the oldest-known gray whale Archaeschrichtius ruggieroi, and a species of beaked whale Messapicetus longirostris.
Tags:
cetaceans, whales, miocene, zygophyseter, marine mammal, ocean animals
Related images